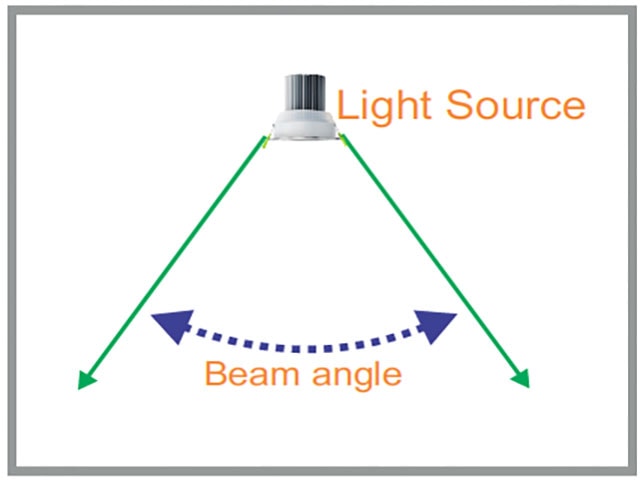 LED downlights are available in a multitude of beam angles. What is a “beam angle”?

In simple terms, it is the width of the light emitted from the luminaire, measured in degrees.

This is important to understand when choosing beam angles. Wide beam angles are not “better” than narrow beam angles. There are applications
that simply require one or the other.

Modern LED’s can produce light in a relatively wide dispersion pattern, but the direction of LED light can be controlled more efficiently than traditional lighting technologies. LED light from narrower beam products is controlled by secondary lenses in front of the chip.

IES files contain beam angle information that is used by lighting designers to help create the effect you are looking for.

A selection of LED lenses that control the beam angle

Let’s say that you are lighting your kitchen. Tasks such as food preparation require more intense light than other areas of your home. It would be preferable to control the amount of light to make most of it fall on to the task or work surface.

A narrower beam angle of say 35 degrees would produce significantly more light intensity on the work surface (measured in Lux) than say a wide 100 degree beam angle, assuming they have similar wattage and efficiency.

The wider beam angle would spread the kitchen light around the adjoining areas which would result in a lower Lux level on the working surface.

For open areas wide beam angles produce a far more uniform coverage, avoiding “hot spots” common with narrow beam angle options seen during the early adoption period of LED. Back then, there were not enough Lumens (Brightness) to justify a wider beam angle. LED’s were commonly seen to provide a bright dot on your floor with the surrounding area and walls in relative darkness. This resulted in a generally gloomy room appearance due to lack of ceiling and wall illumination.

If you want hallways and open areas uniformly lit, then a wider beam angle will do it easily with a lower quantity of fittings. For task light areas such as kitchens and home offices and vanity basins, narrower beam angles will see a significant uplift in useable light to help reduce eye strain.

Advice: Beam angle choices can be subjective and used to advantage for great lighting effects. Experiment to see what works in your home. For commercial environments, engaging a lighting designer will ensure Australian Standards are met.

The pool of light becomes larger as ceiling height increases, but light intensity on the surface decreases. If you have higher ceilings than standard, research this issue further before buying.